Revisiting the Past: PRIIPs, CSDR, and SFDR

Delayed, But Not Cancelled: Some Regulatory Breathers

Key deferrals of regulatory implementations in Europe have afforded asset managers some welcome respite, but much preparatory work remains for each.

Delay is preferable to error

With the upheaval caused by the global pandemic, one of the greatest challenges has been scheduling events. Everyone has been impacted by cancellations, rearrange­ments, or deferrals to one degree or anoth­er. Best laid plans have been disrupted at late notice or sometimes with no notice at all. Vacation travel, meals in a restaurant and house calls to family and friends are some of the activities that have been sub­ject to change at short notice. Some regula­tors have faced a similar fate and have had to delay their own plans.

Regardless of the reasons there have been some key deferrals of regulatory imple­mentations in Europe which have afforded asset managers some welcome respite, at least for the time being. However, it’s important to remember that these have merely been deferred not canceled and as such there remains much preparatory work for each even if asset managers now have a little more time to get ready.

Let’s look at these three crucial regulatory delays in turn:

On November 23, 2021, the European Parliament voted to formally delay certain re­quirements for Packaged Retail Investment and Insurance Products (PRIIPs) and UCITS. The changes confirmed that funds already producing a UCITS Key Investor Information Document (KIID) will now have until December 31, 2022 to produce a PRIIPs Key Information Document (KID), and also confirming that a UCITS KIID is no longer re­quired as long as a PRIIPs KID is produced.

The progress of the latest PRIIPs revisions were much anticipated particularly because they were going to include UCITS funds in their latest roll out. The original plan was that UCITS would begin to provide PRIIPs key information documents (KIDs), a tem­plate investor disclosure document, from July 1 2022, following the end of a previ­ously agreed exemption period.

However, on November 23, 2021 the European Parliament voted to extend the deadline once more, this time from the in­tended date of July 1, 2022 until December 31, 2022.1 This “quick fix” amendment has avoided the requirements for trilogue meetings between the EU parliament, EU Commission and EU Council. At the same time, it was confirmed that a UCITS KIID is no longer required so long as a PRIIPs KID is produced to avoid duplicative and confus­ing information being given to an investor.

The extension was universally welcomed by asset managers owing primarily to the inevitable upheaval which would have re­sulted from having to transition thousands of existing UCITS KIIDs to the new PRIIPs KID version.

In voting through the further delay, there was once more much commentary about the evident deficiencies of the PRIIPs and MEPs tabled an amendment to the regula­tion that would allow asset managers to continue to provide professional investors with a UCITS KIID (in the format they do currently) if they wished. The PRIIPs KID has proven to be unpopular with investors and asset managers alike due to primarily the inclusion of future performance scenar­ios and concerns around the calculation of fund costs particularly transaction costs.

Finally, the European Commission has al­ready begun a wider review of the PRIIPs regulation as part of its Retail Investment Strategy which itself is a cornerstone of the wider Capital Markets Union initiative. This reviews findings are due to be pub­lished in Q2 of 2022. If the EU’s goal is to increase retail investor access and under­standing of mutual funds, then the PRIIPs KID debate becomes extremely important. The goal should be creation of a template disclosure document that is useful and easily understood by investors, as the current UCITS KIID is.

The Central Securities Depositories Regulation (CSDR) is one of the key regu­lations adopted in the aftermath of the 2008 Global Financial Crisis and focused on ensuring more efficient settlement of securities in Europe. For some asset man­agers, it was largely seen as a custodial issue but that’s only partially true. CSDR’s iterative roll out has been in train since 2014 However, the last and most conten­tious part is the Settlement Discipline Regime (SDR). SDR includes the provision of mandatory buy-ins and cash penalties for failed transactions.

The industry has long advocated for drop­ping the mandatory buy in (MBI) require­ment, or at least deferring it so that it could be reconsidered as drafted in the legisla­tion. The industry argued that MBI’s disrup­tive impact would lead to higher trading costs and spreads and heightened liquid­ity risks, which were born out in certain segments of the bond markets in the early stages of the Covid crisis. Following ex­tensive engagement between the indus­try and public authorities, an agreement was reached in trilogue in November 2021 among the EU co-legislators that MBI should be delayed beyond February 1, 2022. ESMA followed up in December by publishing a recommendation to superviso­ry authorities not to prioritize MBI (despite taking effect under the legislation): some national supervisors responded with an­nouncements confirming as much.

MBI is expected to be reviewed by the Commission before mid-2022: the industry hopes that any changes – if MBI is retained in some other form – would take effect with sufficient time for the industry to prepare.

No discussion on European or indeed global regulation would be complete without men­tioning the Sustainable Finance Disclosure Regulation (SFDR). Initially introduced on March 10, 2021, SFDR’s goal is to make dis­closure of financial products’ performance on ESG issues compulsory for EU asset managers, to help EU’s broader ambition to meet its emissions reduction targets. Its implementation is a hugely complex under­taking, and we have already seen a delay to the application of the regulatory techni­cal standards (RTS) to July 1, 2022, also not its first deferral. Then in late November, the European Commission confirmed that, due to the “length and technical detail” of the directive, it would delay the application of the RTS six months until January 1, 2023.

The SFDR ‘level two’ obligations require funds to report on 18 mandatory principle adverse impacts statements (PAIS) as well as other voluntary areas of disclosure. While this delay is broadly welcomed, asset man­agers should know that they still provide disclosures under SFDR, and they are ex­pected to comply with its requirements on a best-efforts basis until then. Asset manag­ers continue to scramble to find solutions to gather all the necessary data to adhere to the very prescriptive and detailed disclo­sures contained in SFDR and the other ancil­lary ESG regulations which are cropping up across the global capital markets. 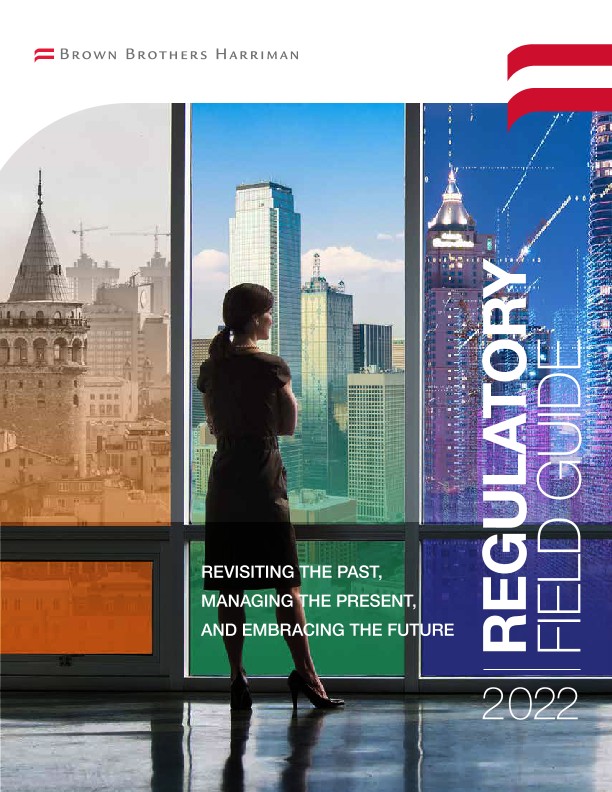 SHOW ALL
SHOW ALL

Brown Brothers Harriman & Co. (“BBH”) may be used as a generic term to reference the company as a whole and/or its various subsidiaries generally. This material and any products or services may be issued or provided in multiple jurisdictions by duly authorized and regulated subsidiaries. This material is for general information and reference purposes only and does not constitute legal, tax or investment advice and is not intended as an offer to sell, or a solicitation to buy securities, services or investment products. Any reference to tax matters is not intended to be used, and may not be used, for purposes of avoiding penalties under the U.S. Internal Revenue Code, or other applicable tax regimes, or for promotion, marketing or recommendation to third parties. All information has been obtained from sources believed to be reliable, but accuracy is not guaranteed, and reliance should not be placed on the information presented. This material may not be reproduced, copied or transmitted, or any of the content disclosed to third parties, without the permission of BBH. All trademarks and service marks included are the property of BBH or their respective owners.© Brown Brothers Harriman & Co. 2022. All rights reserved. IS-07924-2022-02-11