A new tool that helps business users test and validate their own POCs is set to join the bank’s ranks alongside its other AI projects implemented over the last two years: Linc, Guardrail, and Ants

The following article originally appeared in WatersTechnology on June 30, 2021. Written by Rebecca Natale.

Brown Brothers Harriman has been busy—so busy that in the past two years, the bank’s in­vestor services unit has three large-scale tech platforms underpinned by various forms of artificial intelligence, and is set to roll out a fourth to its in­ternal users in July.

The most recently implemented proj­ect, Guardrail, was completed in 2020 and is part of an ongoing endeavor to radically transform its fund account­ing process. It expanded upon one of BBH’s first AI projects in the division—the Anomaly NAV Tracking System (Ants), which was developed using supervised machine learning to help BBH’s analysts weed out thousands of false anomalies during end-of-day net-asset-value (NAV) strikes.

The Guardrail application monitors those NAV movements against a benchmark and historical performance and flags variances. It goes a step fur­ther than Ants does by identifying pos­sible reasons for abnormal deviations, and brings those automated insights straight to BBH’s analysts through natural language generation—a rising priority for the bank, which is using the emerging tech to generate “smart alerts” that act as idea generation for research projects, Kevin Welch, man­aging director of investor services at BBH, tells WatersTechnology.

“We did what we said we were go­ing to do, and it’s in place. Now what we’re doing is, let’s say security pric­ing makes up the vast majority of rea­sons why we see these deviations at the fund level to benchmark—that’s already automated. We’re looking at the next level down of reasons, and we’re automating that,” he says. “So what you’ll get at the final view of this is your deviation from the benchmark, and you’ll be able to say security pric­ing looks good, but then look at corpo­rate actions and be able to go through what used to be four or five separate checks and reconciliations.”

The forthcoming AI-based algo valida­tion tool is meant to help BBH’s own business users more easily verify their own proofs of concept (POCs), taking some of the onus off its data scien­tists and IT resources, who have often been caught in the middle of explain­ing results or finding the necessary data. The application was already in use by the bank’s clients, but after positive feedback, Welch and others in his business unit decided to deploy it throughout the organization, begin­ning next month.

The thesis of this tool is that if a busi­ness user identifies a problem that technology can potentially solve, they should be able to quickly access and scale the model, test their theory in real time with real data, and interpret the results for themselves. For ex­ample, if a BBH user wants to exper­iment with predictive analytics for forecasting trade fails, the platform will allow them to locate the data they need in the bank’s system, onboard it, normalize it, and then view the results dashboard format. From there, they can choose to tweak the datasets or try out different models that have been developed by IT.

“One of our lessons learned is that AI is really powerful and a lot of times the allure of demonstrating the raw capa­bilities of AI can outshine delivering actual business value. So we’ve been really focused on where we can use AI to deliver lasting value. And more and more as we thought about this, we realized it’s hard to do that in a lab or IT group that’s really separated from the business,” Welch says.

Sitting alongside Guardrail, Ants, and the algo validation tool in the investor services business is Linc, the foun­dation upon which the others were ideated and built. Linc is an artificially intelligent reconciliations tool that re­views positions in BBH’s custody and accounting records and automatically routes and matches them. Though it’s well into production and not under­going significant updating, Welch says the bank is getting more than 95% matching accuracy through Linc now.

Welch says BBH has no plans to com­mercialize any of its AI products at this time, though it is a prospect he expects the bank will likely consid­er as reconciliations, striking NAVs, anomaly detection, and POC valida­tion are wider industry problems. 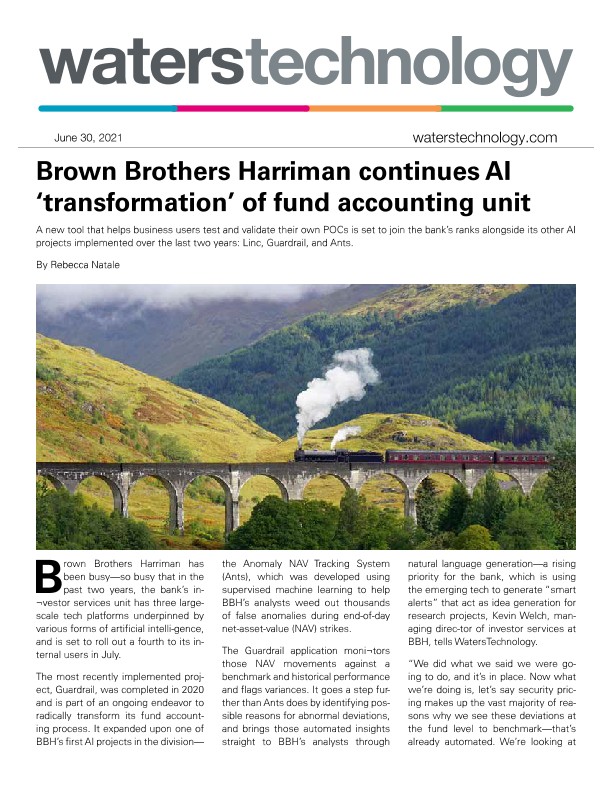 Brown Brothers Harriman & Co. (“BBH”) may be used as a generic term to reference the company as a whole and/or its various subsidiaries generally. This material and any products or services may be issued or provided in multiple jurisdictions by duly authorized and regulated subsidiaries. This material is for general information and reference purposes only and does not constitute legal, tax or investment advice and is not intended as an offer to sell, or a solicitation to buy securities, services or investment products. Any reference to tax matters is not intended to be used, and may not be used, for purposes of avoiding penalties under the U.S. Internal Revenue Code, or other applicable tax regimes, or for promotion, marketing or recommendation to third parties. All information has been obtained from sources believed to be reliable, but accuracy is not guaranteed, and reliance should not be placed on the information presented. This material may not be reproduced, copied or transmitted, or any of the content disclosed to third parties, without the permission of BBH. All trademarks and service marks included are the property of BBH or their respective owners. © Brown Brothers Harriman & Co. 2021. All rights reserved IS-07551-2021-08-05

This browser is not fully supported by our public website and may not display or function as expected for this reason. Please note, the Infuse Portal and BBH client applications fully support the IE 11 browser.